Is the Danish concept of free play in danger? 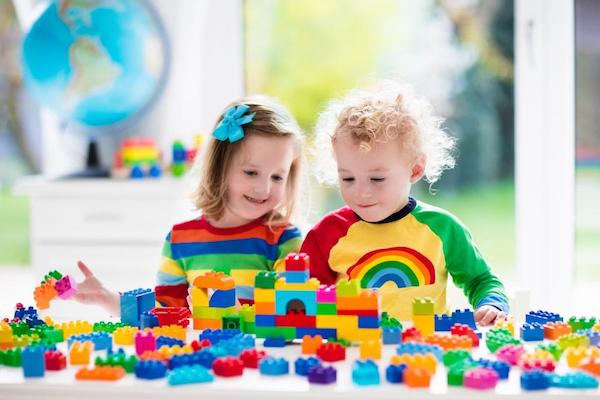 Parenting expert Jessica Alexander worries that even in Denmark, where play is seen as a necessary part of a child’s life, free play could be pushed out by a focus on competitiveness.

I recently took a tour around the International School of Billund, Denmark which is backed by the Lego Foundation and situated in the Lego capital of the world, so to speak.
For those who don’t know, Lego is a Danish brand and it is a combination of the words ‘leg godt‘ or ‘play well’. It’s one of the building blocks of Denmark’s firm belief that children need a lot of unstructured playtime to be healthy.
Rows and rows of Lego-based learning could be seen throughout the school along with tinkering walls, creative corners and design centres where kids were making clothes in Project Runway style rooms as part of their after-school programming. The school is built on a philosophy of learning through play, and teachers strive to incorporate play and creativity into the curriculum at every stage, from kindergarten through students’ early teens. This is special even for Denmark, where play is seen as a necessary part of a child’s life.
While I was there, I ran into a group of Harvard researchers who were working together with teachers to investigate what it means to put play at the heart of a school’s curriculum and how one measures this.  The idea is to create an educational framework and tools that can be used by other educators interested in making learning more playful.
While I think this research is truly fascinating, I also feel a little bit nervous about it.
When my book ‘The Danish Way of Parenting’ was first released, I did several interviews with my co-author about play and what the future might look like in countries where free play had declined in favour of scheduled, adult-led activities.
Some studies, for example, show that the amount of a child’s free play in America has dropped 50 percent since the 1950s just to put it in perspective.
One thing I kept repeating in these interviews was my fear that free play might one day become an oxymoron or commercialized. I was afraid that, as soon as it was proven to be serious learning, someone would surely want to measure it, package it and ultimately sell it.
Let me say that the International School of Billund is not interested in selling its findings or quantifying the “learning results” for any toy or technique. School officials know that they are investigating something that is almost inherently unmeasurable, but they believe that it’s worth it if it empowers children to see learning as a pleasurable lifelong pursuit. I think what they are doing is very interesting and the school is brilliant.
My concern, however, is that at some point, somebody will try to quantify the concept of “play” and sell it. And the idea of charging for play feels a bit like selling an overpriced apple and labelling it as a diet product. It defeats what should just be a natural healthy part of life, not a specialized technique or super food.
I can already foresee parents cutting back on the violin, Chinese and organic cupcake making lessons to enrol their kids in free play courses where children could get score cards on how much their social skills, negotiation and empathy capabilities increase. Where they can get graded for their collaboration, self-control and resiliency. All of these things, unfortunately, completely defeat the purpose of why play is so good in the first place.
Free play is a child’s way of making sense of their worlds. It’s their way of coping with anxiety and expressing themselves and feeling in control of their own destiny. This is where some of their sense of self-esteem gets developed and this can’t be controlled, coaxed or measured by an adult.
I often wonder if that competitive edge everyone wants to buy for their kids is cutting away at the very self-esteem we want to build up. What if kids really just need more freedom to feel in control of their own lives?
All of this pressure is coming from an ever increasingly competitive society. It’s not coming from kids. They are just mirroring what we want. If we could relax ourselves, sand down our competitive edges, let kids be kids and trust them more to trust in themselves, we might see a drop in anxiety and a true increase in happiness down the line. And wouldn’t those be measurable results we could be proud of?